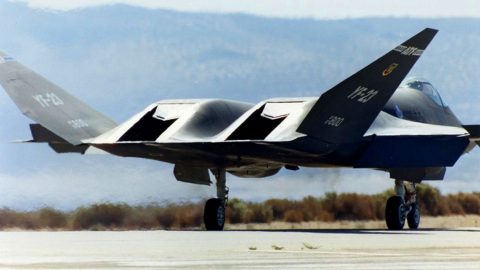 Not A Bad Design Actually.

This slightly unconventionally looking aircraft is Northrop’s submission for the Advanced Tactical Fighter (ATF) Program. In 1981 the United States Air Force asked most of the top aerospace companies to come up with a new concept for a contemporary fighter after spotting Soviet Su-27s and MiG-29 on a reconnaissance mission. Afraid the U.S. was falling behind, they wanted to take advantage of new materials and technologies to be ahead of the curve.

Although companies from Boeing to General Dynamics entered the competition, only two designs were selected by 1986. Lockheed’s YF-22 which is now the Raptor and Northrop’s YF-23. By 1990, both of the prototypes were in the air.

After 50 successful flights of the YF-23 (called Spider, then Black Widow II and finally Gray Ghost by the way) which lasted for over 60 cumulative hours, a winner was announced. It was Lockheed’s YF-22.

The official evaluation stated that although the YF-23 was stealthier and faster, YF-22’s thrust vectoring nozzles made it much more agile and allowed it to perform much higher angles of attack.

The two prototypes of the YF-23 can be seen at the National Museum of the United States Air Force near Dayton, Ohio and Torrance Airpot, Torrance, California.