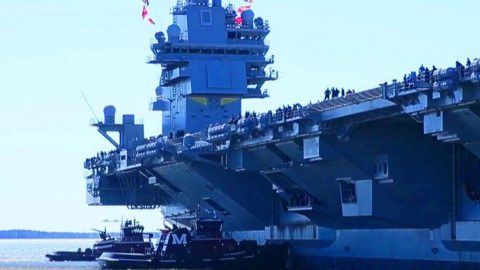 The Nimitz-class aircraft carriers have long reigned as the biggest vessels in the US Navy, but now they have met their successor. The first of a new class of supercarriers has arrived to keep the waters of the world a safer place. The USS Gerald R. Ford has completed construction and has launched for builders trials to evaluate its performance.

Named after President Gerald Ford this first-of-class supercarrier has spent the past four years under development nearly ready for service. This is the first of planned Ford-class supercarrier and testing on the open ocean has started to see how its design should influence the other nine upcoming supercarriers.

“The Navy and our industry partners are excited to have the future USS Gerald R. Ford underway under her own power for the first time, executing a rigorous and comprehensive test program for this first-of-class ship.”

The Ford-class supercarrier has come under scrutiny by the armed forces committee for going $2 billion over budget and essentially being designed while it was under construction. Despite the controversial construction it is shaping up to be a very impressive vessel. Check out the first glimpse of the USS Gerald R. Ford in this clip, courtesy of the US Navy.