B-52 Smashes ISIS Base With 2,000-Pound Bombs – Bunkers Busted And Blasted 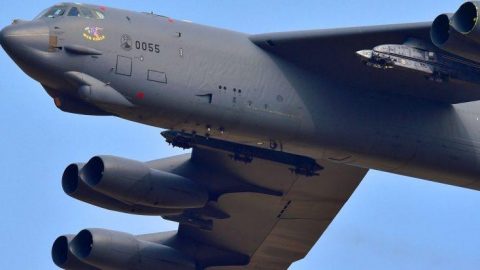 It is so good to see the Boeing B-52 back in action after such a long time. It may be over 60 years old but it can still get the job done when it comes to destructive bombing. The Middle East has been plagued by attacks from ISIS, so the B-52 is there to show them what a real explosion looks like.

After taking a hiatus of over 10 years the B-52s were brought back into action in April 2016. The growing presence of ISIS forces in the Middle East called for some intense bombing to stop their terrorism. A lot of them have been hiding out in bunkers or in caves. Fortunately, the B-52s are equipped with 2,000-lb bombs perfectly suited for blasting them to hell.

It doesn’t take a whole lot to win a battle but the B-52 has no problem with overkill. So take a look at this video onboard a B-52 as they track down ISIS bases and unleash their fury.