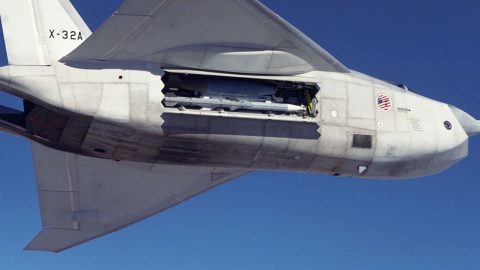 Ok folks, this is pretty old news but most people don’t even know about this…plane. We came across it again when doing some research and decided to give you guys a reminder of the fact that the F-35 Lighting II is not all that bad. At least esthetically.

Now, we’re not engineers so we don’t want to sound like a bunch of A-holes. We’ll admit it. We can’t even conceive how they put air in the tires of these planes, so we have no right to criticize, but we will simply because it’s hard not to. We do understand that planes are pure function. Take the A-10 for example. Some say it’s ugly (although we don’t think so) but the point is that every single part of that platform is there for a reason. We get that. They’re supposed to be effective, not pretty. C’mon, just look at this thing. When the Joint Strike Fighter (JSF) began in 1993, four companies submitted their designs. Two, Lockheed Martin and Boeing, entered the final stage and actually made their prototypes.

Lockheed’s was the X-35 which looks almost identical to the F-35. And then there was Boeing’s X-32.

It did fly as you’ll see in this video, but, and it is our opinion of course, it’s just ugly. Downright silly looking to add insult to injury. We’ll say again that we understand that looks have nothing to do with function, but still. When we looked up the plane, hundreds of memes popped up, so we chose our favorite and pasted it into this post. Hope you find it as funny as we did.