C-130 Got CRAZY Low But The Cameraman Didn’t Budge 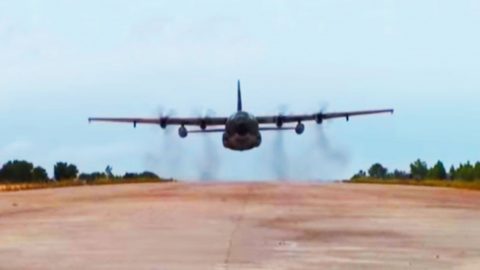 The Real Question Is, “Who Was Braver?”

We all love our low flybys at the highest speeds possible. The typical videos we always find are your F-15s, 16, and 22s. They’re really fun to watch as they go mighty fast, but then we thought, why not a cargo plane?

Sure, they don’t go as fast, but their sheer sizes are amazing. Which also makes them super scary when they fly next to or over you. After some digging on the internet, we found some great examples of that, one of which you’re about to see.

The C-130 Hercules is equipped with four turboprops which you clearly will be able to hear in this video.

Although there isn’t a lot of information about this video, one thing is for sure. You’ll looking at a C-130. Name Hercules, these babies were built by Lockheed and first entered service in 1954, just 9 years after World War II. Since then, they’re one of only five aircraft in the world to be produced continuously for 50 years.

The other thing that we know for sure is that this cameraman is either impervious to fear or he trusts that Hercules pilot with his life. It seems like he didn’t even budge. Quite the contrary, he actually stood up (it seemed like he was kneeling at first) to get a better shot. Pretty great stuff!