Chinese Navy Celebration Poster Fails Miserably – Can You Spot All Their Mistakes? 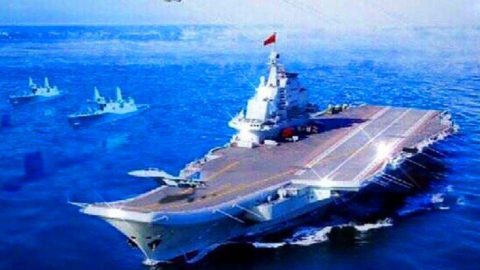 The Navy is ramping up celebrations to showcase their 68th anniversary with a display of military might. They wanted to show the world just how strong they weapons of war really are. However, the weapons of war that they showed in their promotional poster don’t look like the ones they actually have.

Just take a second to look at this poster, it’s like a Where’s Waldo of military amateurism. The term “Made In China” definitely resonates with this poster, but it’s not just how cheap it looks there other wrongs. Honestly, the only thing they got right about this poster is the Liaoning, their aircraft carrier just about everything else is so poorly done. The jet taking off the carrier is actually a MiG-35, a Russian jet not used by China’s Air Force. The poorly photoshopped ships behind the carrier are American San Antonio-Class Amphibious Assault ships. Although the jets flying above the carrier are in fact Chinese, they are J-10 fighters and are not launched from carriers.

They tried to make their military look fearsome but they failed miserably by doing cheap knock-offs of other people’s work. This was so bad that it even earned them a spot getting railed by TOMO news that you can watch in this clip.﻿