E-2 Hawkeye Unfolding Its Wings Is A Work Of Art 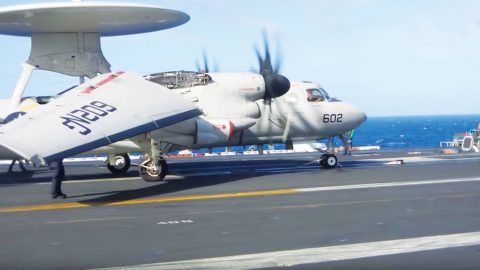 And Off We Go.

This footage was taken aboard US John C. Stennis a couple of years ago. For some of you, this might not be too exciting, but we’re aviation buffs so if there’s a plane involved, we like it.

This short clip shows two things we’re interested in. The secondary is the takeoff. We seriously never get tired of watching them. Going from 0 to well above 100 miles per hour in mere seconds is incredible no matter who you are. The thrill, the rush, and the experience must be just awesome, so yeah, we might be adrenaline junkies.

The primary thing that got us interested in this video, however, were the wings. We all know that most Navy planes have folding wings in order to save room on deck. This makes perfect sense of course. The Hawkeye, however, does it a bit differently.

If you compare a Hornet or Tomcat for example, their wings fold back or up. These planes are smaller as well, so they don’t take up that much room on deck to begin with. The Hawkeyes are much bigger though.

At 80 feet 7 inches in wingspan, that’s a lot of deck space. You can fit almost three Hornets in that area. That’s why their wings were designed to fold in and back, making them just slightly thicker than the fuselage itself.