Firing Bullets Through Propellers at 120,000 Frames Per Second 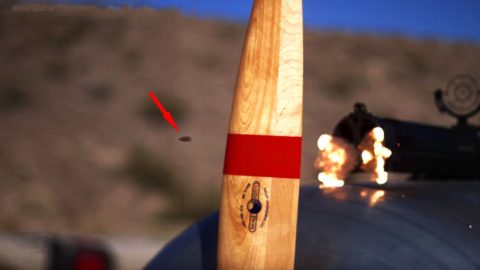 We don’t know what’s more incredible; the fact that in 2016 we have the technology to film bullets at 120,000 frames per second or that in 1913, just years after we started flying, you could shoot bullets through a spinning propeller. Both are great feats of technology, and the video you’re going to see combines the two.

Welcome to one of the most addicting channels on Youtube, namely, The Slow Mo Guys. What started as a small and fun project has now grown into hundreds of videos you can’t take your eyes off of. Equipped with a camera which costs thousands upon thousands of dollars, these guy film EVERYTHING in slow motion. From firing guns to smacking flaming tennis balls, everything they do is truly captivating.

In this installment, they did something most of you would be really interested in. Although World War II planes had wing mounted guns (for the most part), World War I planes were where new weapon placements were tested. One of them was the gun synchronizer.

The gun was placed at the nose of the plane and fired through the propeller. Although that might seem like a bad idea, the mechanism that triggered the bullet was pretty simple and effective. These guys go into some more details about that.