Footage Of “Goblin” Refueling In The Air 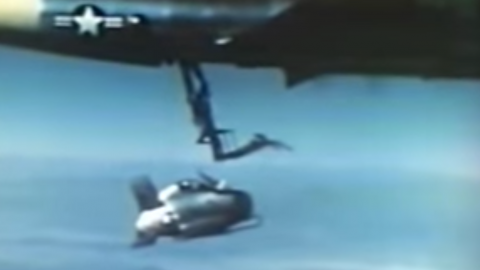 Size isn’t everything, but sometimes it can be good for getting a sneak attack on enemies. The McDonnell XF-85 Goblin was the embodiment of sneak attacks because it was so small that you wouldn’t expect it.

Commonly known as the parasite, this small fighter was designed to launch from the bomb bay of larger aircraft such as B-29 and B-36 bombers. The Goblin was intended to launch a surprise attack on enemy interceptors and engage with M3 Browning machine guns. Reaching speeds of 650 mph with great agility the XF-85 was stable and pilots adapted well, but it was not without problems.

“Docking had proved too difficult. But by that time, the Goblin was no longer needed. In 1949, the Boeing KB-29P, with its flying boom aerial refueling system, had solved the problem of long-range fighter escort for bombers.”

Lack of landing gear and troubles docking within the bomb bay B-36 meant an early end to the XF-85. Only two models of the Goblin were built and have remained in Air Force Museums since the cancellation of the program in 1950. The world’s smallest fighter jet was a good idea on paper but as you can see in this test footage there were problems that could prove fatal to the pilot.