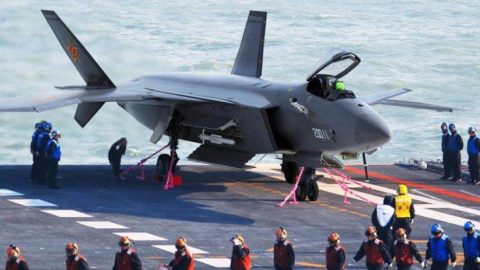 Anything You Do The Chengdu Better.

The United States Government has been hard at work developing the F-35 meanwhile China is designing their new fighters. The Chinese Government revealed the Chengdu J-20 as well as the Shenyang J-31, to tell the truth, they look familiar. The reason that the new stealth fighters look so familiar is that China created them from stolen F-35 plans. How could this happen? The US Government is secretive with their plans to the point where they will not sell F-22s to other nations.

“In January 2015 NSA slides from whistleblower Eric Snowden were released by German newspaper Der Spiegel. The slides show that Chinese hackers had stolen plans for the B-2, F-22 and F-35. All stealth aircraft. In total 50 terabytes of U.S. Government data were stolen, including the F-35’s stealth radar and engine systems. And when a new Chinese prototype, the J-31 was rolled out it brought, even more, similarities with U.S. stealth aircraft designs than the J-20.”

Imitation is the sincerest form of flattery, however, this kind of flattery is dangerous. Even if they are not attacking the United States, China willing to sell them other nations as an F-35 alternative. China is crafting potential threats and profiting from information they had no right to own, the theft never ends. This is more than a security breach, there is a history you will see in the video from Generation Tech.