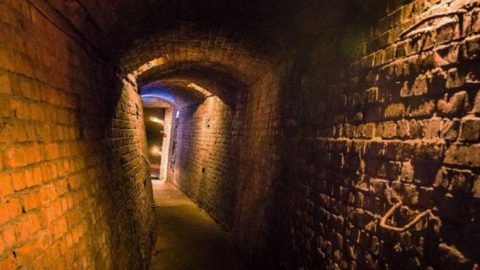 Adolf Hitler was a man with vision, a twisted vision but he always looked ahead to for his empire. A fan of architecture, massive weapons, and defenses to secure the Third Reich against its enemies. All across Europe, there are remnants of the Nazi Empire that are still being discovered and explored, very much like an underground military complex in the Netherlands.

Lost overtime to the shifting sands the newly discovered military complex is undergoing restoration to become a historical relic. Built on the backs of captured slave laborers from the nearby city of Hague the underground military complex was part of the massive Atlantic Wall, which spanned from the south of France to the Northern parts of Norway. After invading the city, locals were forced into slave labor to construct the massive bunker which would house serve as an outpost for infantry units.

The complex could house up to 3,300 people, it was equipped with spa facilities, kitchens and just about everything required to accommodate the soldiers stationed there. Europe is littered with German military bunkers and discovering new ones is not uncommon. Join BBC News as they explore the remnants of this forgotten Nazi city in this clip.