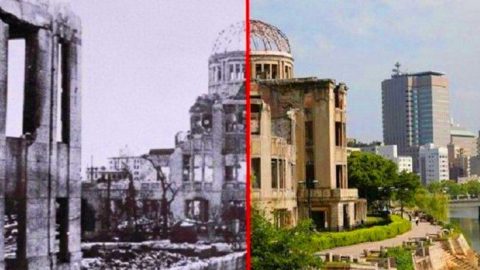 The United States didn’t want to use the atomic bomb on an unsuspecting population, but they had to in order to end the war. The sight of the city after the detonation of a weapon of mass destruction was one of the most revolting images in history. Over seven decades have passed since the weapon was used, so how has Hiroshima changed?

August 6th, 1945 stood as one of the darkest moments in America’s history. Many of America’s top military leaders opposed the use of the Atomic Bomb. Admiral Chester J. Nimitz, General Douglas MacArthur, and General Dwight D. Eisenhower all warned against the use of such an inhumane weapon, knowing the war was already won by the Allies but needed more time. However, the United States could ill afford more time nor could they risk a land invasion of Japan which would result in millions of deaths on both sides.

Shortly after 8:00 AM the Enola Gay dropped the atomic bomb on Hiroshima, instantly killing 70,000 people and leading another 70,000 to die a slow painful death from radiation. The city was in ruins as charred building were the only things left standing and those who survived left to a tormented existence.

“The greatest marvel is not the size of the enterprise, its secrecy, nor its cost, but the achievement of scientific brains in putting together infinitely complex pieces of knowledge held by many men in different fields of science.”

It was not a proud moment in history, but a necessary one to help bring peace to the world. No matter how tormented an existence, life goes on and the United States helped Japan after the war as an ally to repair the damage done to the war-torn nation. This video is living proof as it shows images of Hiroshima after the bombing as it is today as a modern city.