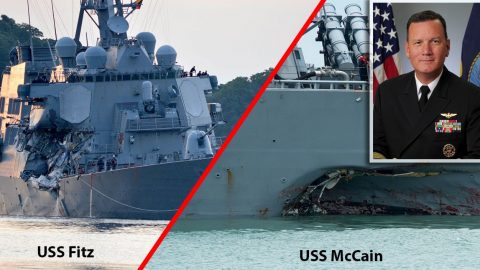 The middle of last year was extremely bad for the United States Navy. Within weeks, two ships, USS Fitzgerald and USS John S McCain, collided with much larger commercial vessels in busy shipping lanes leaving seven and ten sailors dead respectively. After the incidents, the commander of the Fleet was dismissed of his duties shortly thereafter and now the investigation came down to the ship’s commanders and lower-ranking officers.

“Both of these accidents were preventable and the respective investigations found multiple failures by watch standers that contributed to the incidents.” U.S. Navy

In a statement on January 17th, 2018, the Navy’s spokesperson told the press that it will be filing an Article 32 hearing which might lead to a court-martial of several officers and commanders. They are facing dereliction of duty, hazarding a vessel and negligent homicide.

The commanding and lower-ranking officers are facing such tough charges (innocent until proven guilty) as the loss of life in such a close time period called for a thorough look at the Navy’s procedures. The subsequent investigations brought to light that both collisions were avoidable and were caused by a number of compounding mistakes that ended in these tragedies.