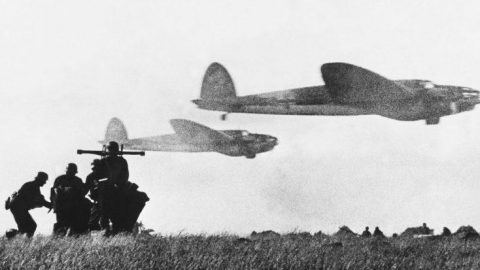 Defense Of The Reich.

Early on in WWII the German Luftwaffe were the hunters, but as the war progressed on they found themselves to be the hunted. The Allied Forces brought their most powerful offensive capabilities to attack Germany in the form of huge bombers. So in response, Germany retaliated with their greatest defensive fighters of the Luftwaffe.

Defense of the Reich was the operation by the Luftwaffe to defend German-occupied territory from the invasion of Allied forces. Initially, the operation emphasized anti-aircraft artillery (AAA) as a deterrent for the Royal Air Force bombings. However, the anti-aircraft artillery soon proved to be ineffective against high-flying bomber aircraft beyond their firing range so they turned to the Luftwaffe.

The Luftwaffe was able to hold their own against enemy bombings but it suffered from a key weakness, Germany wasn’t prepared for a long-term war. Hitler planned on taking over Europe quickly and swiftly, taking resources from each nation he conquered. However, the Luftwaffe needed oil to keep their planes flying and reserves were dangerously low at this point. The Germans made the decision to invade Russia for their oil reserves but their mission ended up being a disastrous defeat for Germany.

By 1944 the Luftwaffe was a shadow of its former self, barely able to hang on with the few poorly trained pilots it had left. Many claim it was the introduction of the P-51 Mustang that delivered the killing blow to the Luftwaffe because it could fly day and night missions in addition to providing a longer range escort for bombers.

German pilots did their best to defend their country but a number of factors led to their downfall. Many would blame the dwindling fuel reserves, lackluster training or faulty experimental aircraft. But in the end, the war was lost when they were put on the defensive side, it was a fight they couldn’t win and the Reich fell from the sky.