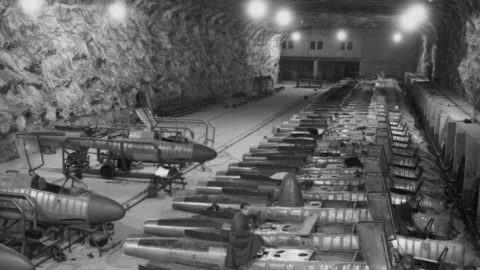 The American assault on Germany during WWII was hectic and tense and for infantry. The once powerful nation now backed into a corner and fighting for its life with savage ferocity and no one knew what would happen next. On April 24th, 1945 as American infantry units of the 9th Army were exploring a salt mine in came upon the discovery of a lifetime.

The underground salt mine actually ended up being more of a gold mine to the Allied troops when they discovered the Luftwaffe’s secret weapon the Heinkel He 162. Although the Luftwaffe had tapped into jet engine fighters with the Messerschmitt Me 262 the Heinkel He 162 in many ways was far superior. The Me 262 faced interference from Adolf Hitler who envisioned the jet as a bomber rather than the as a fighter, but the He 162 had more freedom.

The He 162 was quite agile and fast during its combat testing. Resources were becoming limited to Germans when they were put on the defensive side so the He 162 utilized a single jet engine rather than two and was made of wood instead of metal. Many of the top Luftwaffe pilots were given He 162 to fight in aerial combat, but their lack of training in these new planes required a steep learning curve and never garnering as many kills as they did in Fw 190s and Bf 109s.

“Like every other early jet aircraft, the He 162 was underpowered, but it had the worst safety record of all the early jet aircraft. This was in part to its being rushed into production before the prototypes were completed. It’s been said that the He 162 inflicted more casualties on German pilots than the enemy.”

Production of this revolutionary new fighter jet was moved to underground salt mines to avoid destruction from Allied bombers. The He 162 could avoid destruction but it couldn’t avoid detection when the Allied Forces discovered their underground factory and the jet ended up in the possession of the United States. Less than seven Heinkel He 162 still exist today, but you can examine one of them in this clip.