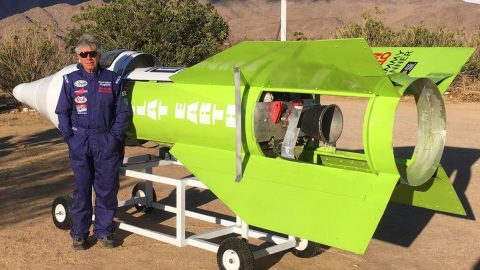 A few months ago limo driver and amateur stuntman “Mad Mike” Hughes prepared to launch himself into a rocket over the desert. This was a bid to prove the Earth is actually flat, but his efforts were derailed due to safety concerns. However, after sitting things out for a while Mad Mike is back with a brand new homemade rocket to prove the Flat Earth Theory once and for all.

Mike Hughes makes no secret about his dedication to the Flat Earth Society and opening the minds of the poor people imprisoned to the belief of a round Earth. Now Hughes will prepare a new rocket launch on February 3rd hurling himself nearly 2,000 feet into the air to finally stop the lies put out by NASA.

“I don’t believe in science. I know about aerodynamics and fluid dynamics and how things move through the air, about the certain size of rocket nozzles, and thrust. But that’s not science, that’s just a formula. There’s no difference between science and science fiction.”

It is nice to see a man so dedicated to his science that he would risk his life to travel 2,000 feet into the air rather than just hopping in a commercial plane that would soar at 39,000 feet. Mad Mike gives a quick interview here about his passion for the Flat Earth Theory and what we can expect from the launch.