US Navy Pilots Still Upholding The Highest Standards Of Maturity 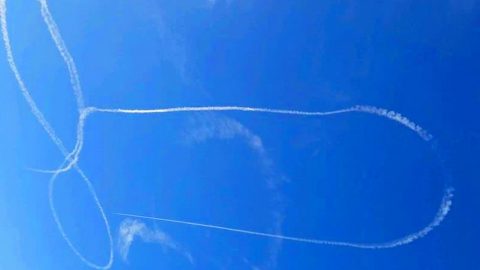 The skies over the state of Washington are always a beautiful sight to behold for anyone lucky enough to see them. This state has a long history of aviation in military and commercial and it continues to embrace that legacy. However, the people of Washing noticed that something else was popping up in the sky and had to take a long, hard look at it. An area with so much aviation is no stranger to sky art and everyone expected this to be another masterpiece floating among the clouds. The jet leaving its clouds in its path but soon the image took form and not everyone was thrilled about it. The jet responsible for the sky art was identified as a United States Navy fighter and superiors aren’t jumping for joy about this piece.

“The Navy holds its aircrew to the highest standards and we find this absolutely unacceptable, of zero training value and we are holding the crew accountable.”

The FAA said that the sky art poses no risk to the public because they can’t police morality. However, that doesn’t mean that the superior officers back at the naval base aren’t going to have some harsh words for the pilot and some disciplinary action.