New War Documentary So Real The USMC Wants Ban It 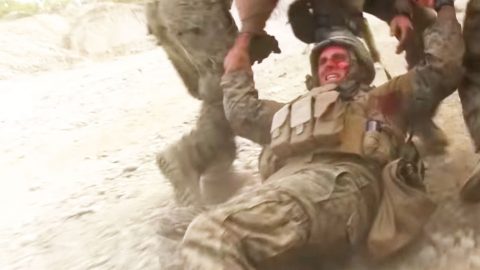 The United States Marine Corps is a shining example of the United States’ military might, discipline, and fervor. The saying, “Once a Marine, always a Marine,” captures the true essence of what the men and women of the Corps stand for, as the training they go through and lessons they learn stay with them for the rest of their lives.

First Poster for Documentary 'Combat Obscura' – An unauthorized look at the daily lives of Marines in an active war zone. pic.twitter.com/0ZHStH2aef

So is their image on the outside.

A new documentary called Combat Obscura will give viewers a real look at life inside the Corps while in battle. It’s not as bad as you think though.  The synopsis of the movie is as follows:

“Just out of high school, at the age of 18, Miles Lagoze enlisted in the Marine Corps. He was deployed to Afghanistan where he served as Combat Camera — his unit’s official videographer, tasked with shooting and editing footage for the Corps’ recruiting purposes and historical initiatives. But upon discharging, Lagoze took all the footage he and his fellow cameramen shot, and he assembled quite simply the very documentary the Corps does not want you to see. COMBAT OBSCURA is a groundbreaking look at the daily life of Marines in a war zone as told by the soldiers themselves. More than a mere compilation of violence, the edit ingeniously repurposes the original footage to reveal the intensity and paradoxes of an ambiguous war from an unvarnished perspective.” – combatobscura.oscilloscope.net

The movie was filmed by a Marine himself with the instructions to cut out all the parts the Marine Corps didn’t condone. Even small things like Marines being slightly out of uniform were to be cut, just to show how disciplined they are. Well, that, and much more was left in the film hence the USMC not being happy about it.

You can see the trailer below and watch it in select theaters outlined above.