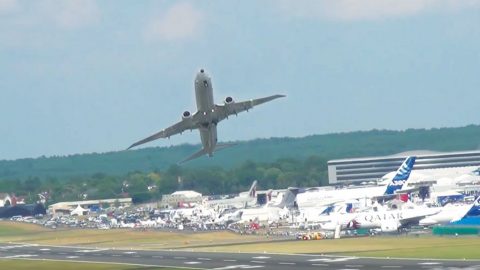 It’s not every day that you can see a big plane take off almost like a fighter jet. This video will show you that it’s actually quite possible, not to mention really entertaining to watch.

The Youtube channel called bobsurgranny brought us this video. If you haven’t check it out yet, we recommend it. This guy has some really great videos and an eye for capturing the best shots.

The P-8 Poseidon is one of the United States Navy’s newest planes. It was introduced in 2013.

Here, we have a P-8 Poseidon. A U.S. Navy plane, it’s used for anti-submarine warfare, anti-surface warfare and electronic signals intelligence. It’s a crucial part of the Navy and does its job well.

As for its design, it’s actually Boeing’s 737 Next Generation which was modified for this role. It’s militarized as well, so aside from having the tech to carry out the above-mentioned tasks, it also carries torpedoes, depth charges and other weapons. In addition, it’s quite agile as you’ll see in this video.