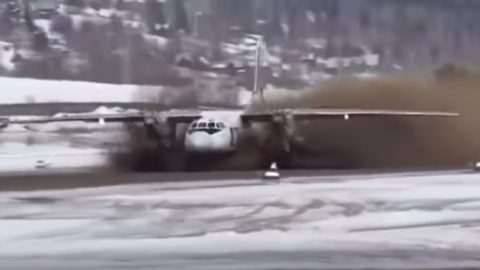 Wouldn’t Want To Be On That Plane.

This is one of the roughest takeoffs we’ve seen in a while. Although the footage is a bit old and the quality is not the best, you can clearly see what is happening. After you do, you’ll probably wish you didn’t.

We realize that there are plenty of dirt runways around the world, but some are more hazardous than others. Add a bit of rain or snow, and you have yourself a pretty crazy airstrip. Such is the case in this video.

The plane you’ll see take off is called the Antonov An-24. It’s a 44 seat twin turboprop transport plane and it was manufactured in the Soviet Union. That’s probably why it’s so rugged and can handle what it does in the video.

You have to hand it to the Russians though. They do in fact build planes that can be beaten to death and still fly. MiGs too can take a beating and keep on kicking. We’ve seen how a MiG-29 came in for a belly landing after its wheels got stuck. After the pilot expertly slid her in, a crew hoisted the plane, unjammed the wheels and the pilot flew back to base.

Try that with any other plane.