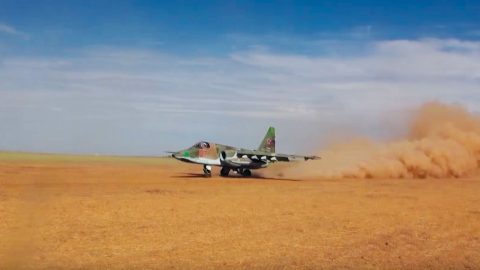 It’s All A Matter Of Perspective.

Ok, before you guys tear us to shreds, let us make something clear right off the bat. We’re only focusing on one aspect of Russia’s CAS platform and it’s something our beloved Warthogs were not made to withstand. It’s quite a useful feature and it’d make the A-10s even better than they are today. Aside from that, there’s really not much to compare as the A-10s are vastly superior. Got it? Ok then, here we go.

There’s really no doubt that Russia can build some crazy aircraft. From Sukhois to MiGs, those planes are highly maneuverable and can carry quite the payload. Not to mention that they had some of the highest top speeds of any fighter in development at the time of their conception.

What they are really known for as well is their toughness. We’ve seen a MiG belly land one time because the wheels were stuck. The pilot slid that thing to a stop, the crew hoisted it up with a crane, dropped the wheels and the plane was off again in no time.

The Su-25 is no different. Nicknamed “Frogfoot,” this Russian CAS platform packs quite a punch. It has a GSh-30-2 30mm cannon and can take off with up to 8,800 lbs of ordnance. It’s no A-10 but it’s the best they got and it’s still pretty good.

What this video shows, and again, the A-10 can’t do, is take off and land on rough terrain. As a matter of fact many Russian built planes can do so including some commercial planes. Built tough, their landing gear can withstand way more than the average U.S. military plane. With no need for a conventional airstrip, these planes are much more versatile when in the fight.

Now imagine the A-10 being able to do so. No flying back to base to reload. It could be done at the closest tactical point with flat land and they’re back to support the guys who need it. Imagine that.