Soviet Russia Created A Deadly New Class Of Aircraft – Why Is It Rotting In A Rusty Graveyard? 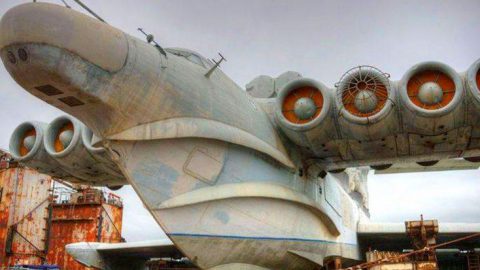 Vault of the Atomic Space Age

As the United States and Soviet Russia entered the Cold War a bitter rivalry developed between the two nations. It wasn’t fought over war but rather the threat of war as they developed bigger and better technologies. This led communist Russia to develop an entirely new class of aircraft, unlike anything the world has ever seen, the Ekranoplan.

This rusty behemoth is actually a Lun-class ekranoplan which is classified as a ground effect vehicle (GEV). A GEV is not a plane, boat or hovercraft but rather the ability to travel at high speeds at a low-level flight usually above a water surface. Cruising in water limits speed of boats while flying at higher altitudes makes it vulnerable to fighters and anti-aircraft guns due to its immense size. The Lun’s high speeds and low altitude allowed it to evade radar detection in order to attack enemy ships with its Moskit missiles.

Although it was designed for combat operations they developers noticed that its speeds could be utilized to conduct rescue operations in maritime locations that aircraft couldn’t reach. However, the Lun-class Ekranoplan was ultimately canceled due to lack of funding.

It was an innovative design that could have been an effective weapon of war and a life-saving vehicle. But now the Lun sits alone, collecting rust as the Ekranoplan that never reached its full potential.