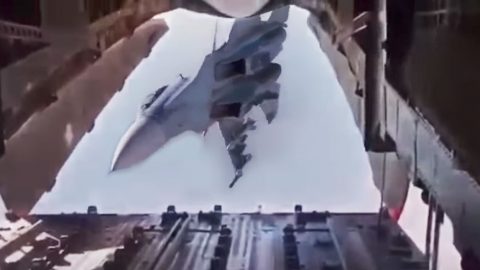 This video came out three days ago and has been making rounds on YouTube and Facebook video alike. It’s not surprising, it’s pretty epic as aviation videos go.

According to the description that we translated from Russian, this was an airdrop that took place in Syria. The plane from which the video was taken was an Ilyushin Il-76 which is commonly used by Russia for airdrops, while the Su-30, Russia’s primary all-weather fighter, was there as an escort.

Let us ask you, our readers, not to make this political. Sure, it’s a Russian jet blah, blah, blah. Syria this and that.

We just appreciate aviators who do their jobs well, and as such, really appreciate this clip for exactly that. Really good maneuvering.

Sure, this might not fly in our Air Force here in the U.S. of A., but this pilot got really close to the ramp and then pulled away in the most spectacular way.

We can only hope that his reason the Su-30 pilot peeked in there was “to make sure the IL-76 dropped everything.”