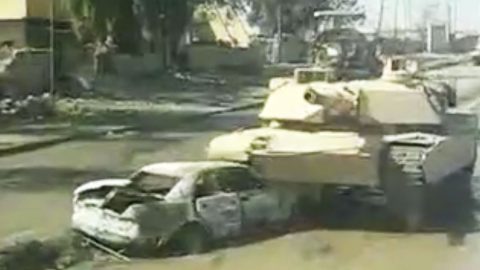 “No, we just said that we think ther….what the hell are you doing?”

Having an Abrams you might feel a lot more confident than riding in a Hummvee, so we figure the tank crew just rode over it just so they could see what it could do and show off a bit.

Again, this is pure speculation, but we wonder if these guys got a bit nervous when that blast actually gave their nearly 60-ton vehicle a nice bump into the air.

If anyone of you knows the actual story though, drop us a line on the Facebook page. We know many of you have served, so maybe, one of you out there, was there…