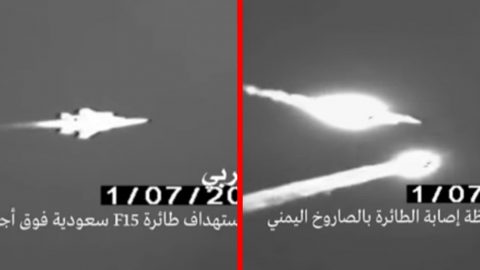 Recently an F-15 Fighter Jet belonging to the Saudi Air Force crashed over Yemen. Officials were unsure of exactly what caused the fighter jet to suddenly meet an untimely demise. Now Houthi Rebels are stepping forward making the claim that they destroyed the F-15 using a ground-to-air missile.

Saudi Military officials dispute this claim saying that a technical malfunction caused the F-15 to crash while over the area. An investigation is still commencing whether Houthi Rebels actually used a shoulder-mounted rocket to take down the $30 million fighter jet or if they are simply claiming any credit that isn’t nailed down.

Another fighter jet crashed in the area shortly before this incident but any real information has yet to trickle out. Houthi Rebels are no stranger to stirring up trouble as a group of them captured a $1 million US Navy vessel and bragged about it on social media networks.

A downed F-15 is still no laughing matter regardless of the cause and certainly calls for an investigation. However, the group has released a film of the attack and the evidence is quite convincing. Plain and simple, this is a heartless act of terrorism against an unsuspecting pilot who was only doing his job.