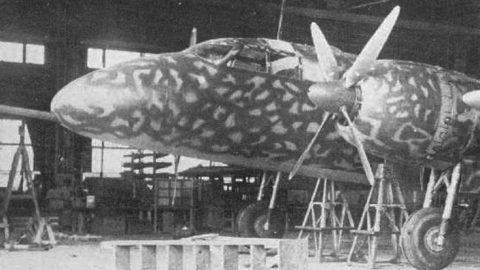 The introduction of the B-29 Superfortress immediately became the biggest threat to Imperial Japan when it debuted. Suddenly this new bomber was within the range of the Japanese mainland, dropping incendiary bombs that burned cities to the ground. Japan needed to do something about the B-29 and so they turned to a new heavy fighter, the Mitsubishi Ki-109.

Based off of the Mitsubishi Ki-67, the Ki-109 functioned in an interceptor role rather than the bomber role of its predecessor. Initially planned for nighttime attacks on bombers the Ki-109 would operate in pairs, one of the planes aiming a searchlight while the other attacks.

However, the Ki-109 had one main flaw in its design. Although the Ki-109 was certainly capable of destroying a B-29 Superfortress, it wasn’t capable of reaching them. Due to resource limitations in Japan later in the war, the Ki-109s were fitted with standard engines rather than the more powerful engines of Ki-67s.

Ki-109s simply couldn’t fly to the altitude of B-29 bombers to attack them. Designed for a purpose but sadly to some oversights, the Mitsubishi Ki-109 would never realize its full potential in aerial combat. Sadly footage of the Ki-109 is rather scarce but you can see this clip of the Ki-64 in flight to get a rough idea of how they few.