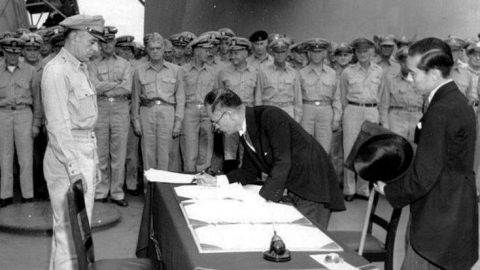 The use of the atomic bomb is hotly debated subject in the realm of World War II history. On one side of the story it saved millions from death, but on the other side, many view it as cruel and inhumane. The weapons helped to end WWII, but it did not force the Japanese to surrender, at least not the way the Americans wanted.

“The use of this barbarous weapon at Hiroshima and Nagasaki was of no material assistance in our war against Japan. The Japanese were already defeated and ready to surrender.”

Many of the top American military leaders opposed the use of the atomic bomb including General Eisenhower, General MacArthur and Admiral Leahy. Despite strong objections, the weapons were used on Hiroshima and Nagasaki as a demonstration of military might. The Japanese kept the war effort going until a few days later when the Soviet Union attacked their forces they finally gave up. But why did the Americans refuse their surrender the first time around?

General MacArthur worked with the Emperor of Japan in order to reestablish the nation. He determined that the Japanese military leaders were to blame for the war rather than Emperor Hirohito, and General Hideki Tojo would take the fall for war crimes.

So in the end, a surrender is was enough until it became an unconditional surrender.