The Only Footage Of An A-10 Pilot Ejecting 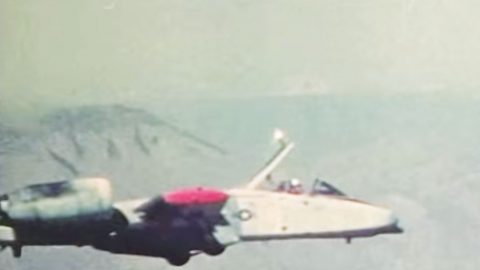 Well, There You Have It Folks.

A-10 Thunderbolts II, or Warthogs, are a force to be reckoned with. The GAU-8 which they point at the enemy is something to be feared as it propels 72 bullets a second towards your position. Like they say, if you can hear the brrrrt, it wasn’t meant for you.

Aside for its firepower, A-10s are known for being extremely tough. Not only does the pilot sit in a titanium bathtub which can absorb most things fired at it, the entire plane is resilient. With a triple redundant system in place, the pilot can still make it back in one piece on “stick and rudder” controls even when the plane is shot to hell.

Although all these things are well and good, sometimes you just have to bail out. This video is actually a training film for the Air Force from back in the 70s or early 80s. The topic was ejections, and the entire film goes through different planes and the pilots who ejected from them.

We queued up the A-10 ejection for you to see, but if you have some time, watch the whole thing. It’s pretty educational and we’re sure you guys can take a couple things away from it.