The Only Footage Of ‘St. Elmo’s Fire’ During A Stormy Midair Refueling 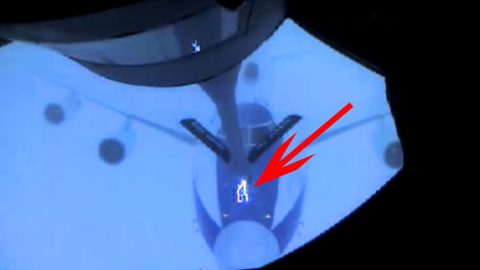 Sparks, Fuel. What Could Go Wrong?

To answer that question, actually nothing. Nothing could go wrong because our Airmen are the best in the world. Who can exchange thousands of pounds of fuel between two massive planes in a storm at night? That’s right, the United States Air Force.

Seriously though. The USAF has the most technologically advanced systems in place, and although we’re not scientists here, we know that in stormy situations electrons can get charged and create a spark (simplified version of the truth here.)

So, in order to remedy a possibly dangerous situation, the boom and the receptacle get equalized prior to the fuel being pumped. It’s sort of like you touching your car to see if you get zapped before you start pumping your fuel (something you should do by the way in case you didn’t already know it.)

St. Elmo’s fire is a bright blue or violet glow, appearing like fire in some circumstances, from tall, sharply pointed structures such as lightning rods, masts, spires and chimneys, and on aircraft wings or nose cones.-Wikipedia

As for the origins of the name “St. Elmo’s Fire,” here’s a short and neat story for ya. This term refers to the plasma discharge you’re seeing in the video of course, and it was named after St. Erasmus of Formia, the patron saint of sailors.

Back in the days of old when scared sailors where traveling who knows where, seeing these lights during storms was a good sign. They took it as the saint looking over them.