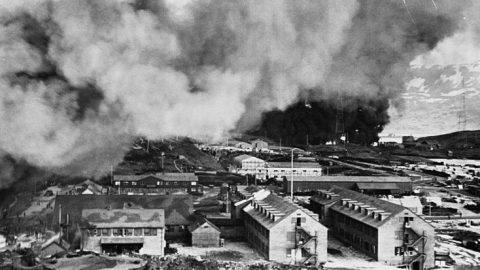 The attack on Pearl Harbor by the Imperial Japanese Navy is often thought of as the only time, the United States was attacked by the Japanese but there is another. The history books often omit the Battle of Dutch Harbor and the savage attack the left the small Alaskan city in ruins.

In order to establish dominance over the Pacific Theater of War, the Imperial Japanese Navy knew they must destroy American bases to prevent interference. With Pearl Harbor temporarily out of commission, that the Dutch Harbor Naval base as the only one in close proximity. On June 3rd, 1942 the Imperial Japanese Navy dispatched an aircraft carrier fleet to assault the base in Dutch Harbor.

Fortunately, Americans had deciphered a Japenese code and knew the attack was coming, but that didn’t make it any less painful. The attack lasted two days over 80 Japanese fighters pummeled the city as Americas fought to defend themselves. In the end, 78 Americans were killed with several buildings damaged while the Japanese suffered only 10 losses. Broken and bleeding the Americans at the base were in luck because poor weather conditions prevented Japanese troops from an invasion of the city.

Despite the savage attack the Battle of Dutch Harbor ended up being more of a victory for the Americans. A few weeks after the attack a reconnaissance plane discovered a crashed A6M Zero fighter in a bog not too far from town. The swampy conditions prevented the plane from breaking apart and was in very good condition. The fighter was taken to Naval Air Station North Island in San Diego, California where it underwent restoration. Because of this single Zero, engineers were able to study it and gain an upper hand against the fierce Japanese fighters of the Pacific and use it to win the war.

75 years have passed since the Battle of Dutch Harbor, but it still remains a forgotten war. The Alaska National Park Service has prepared a short film documenting the attack, including interviews with survivors in this clip.