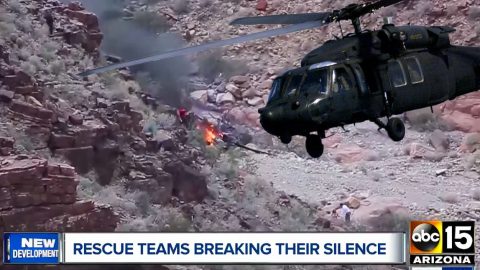 On February 10th, 2018, a group of family and friends celebrating a birthday were part of a helicopter crash that left most of them dead.

It was a sightseeing tour over the Grand Canyon and onboard were six British passengers and the pilot. One of the hikers who witnessed the crash said the winds were gusting very heavily before he saw the helicopter swaying nose up and then down followed by a few 360 spins and finally slamming into the ground. There was an immediate explosion.

The pilot of the rescue team told The Sun Online:

“That was the hardest hoist rescue I’ve ever done for sure, it was very, very challenging. I’ve been deployed to Iraq, Afghanistan, Africa and this was the hardest.” Captain Max Willet | USAF

One woman emerged out of the fiery crash site as you’ll be able to see in the footage while the other three survivors were left with critical burns. None of them could get out of the deep ravine on their own, prompting a UH-60 Pave Hawk out of the 66th Rescue Squadron to try and retrieve them.

As the pilot stated in the interview, there was no way for them to land near the crash site as it was narrow and windy and they would have to do so in complete darkness. Since it was a new moon the visibility was zero and the team had to wear night vision goggle while navigating the tricky terrain.

Watch the official news clip below for the full story.