WWII Footage: Landing a B-17 Flying Fortress On Its “Belly” 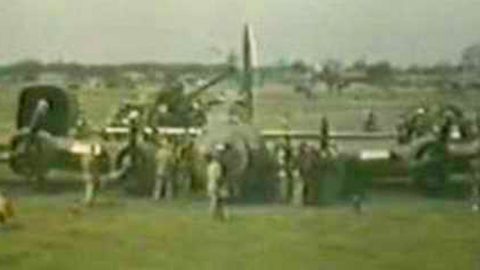 One Of The Smoothest Emergency Landings We’ve Seen!

This original footage taken at Podington airfield in 1944 is really well preserved. You can clearly see a B-17 Flying Fortress land on its belly due to landing gear failure. Considered one of the toughest planes during World War II, the B-17 developed a sturdy reputation for bringing her crews home despite extensive damage. In addition, their effectiveness in battle was also stunning. With 1.5 million metric tons of bombs dropped on Germany during the war, over 640,000 tons were delivered by B-17s alone.

This is what Luftwaffe officers had to say about the Flying Fortresses:

The Flying Fortress’ status grew to iconic levels towards the end of the war. Pilots felt it easy to fly and having increased stability and electrical systems that were protected, they were capable to take on more damage. All in all, it was truly a Flying Fortress!