WWII Soldiers Throwing Mortars By Hand – Did Hollywood Make It Up? 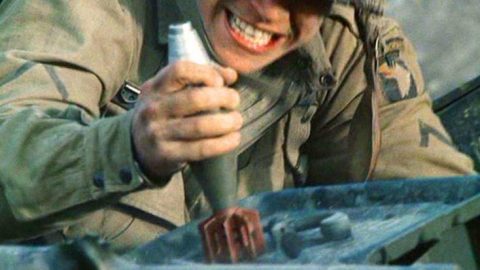 In a few big budget Hollywood films, there are often depictions of life or death situations with improvised weaponry to save the day. The movie Saving Private Ryan often draws some scrutiny for a depiction of a soldier throwing a mortar like a grenade. The movie caught some flak for this scene but there were a few documented cases of mortars being used this way during WWII.

It sounds ridiculous but when worse came to worse mortars were thrown by hand and successfully used against enemies.One of the incidents occurred during the Battle of Okinawa when Technical Sgt. Beauford T. Anderson found himself outgunned by the Japanese and with no other alternatives used hand thrown mortars to drive them back. The other was from Corporal Charles E. Kelly who was surrounded by Germans in Italy and used them to fight for his life.

This kind of tactic was avoided because it is a very high risk and high yield situation. To activate the mortar a soldier would have to slam its bottom on a hard surface and throw it within seconds to avoid the blast. Mortars were more powerful than grenades but were dangerous especially to the operator if thrown by hand.

We Are The Mighty goes into further detail on grenades thrown by hand in this clip.