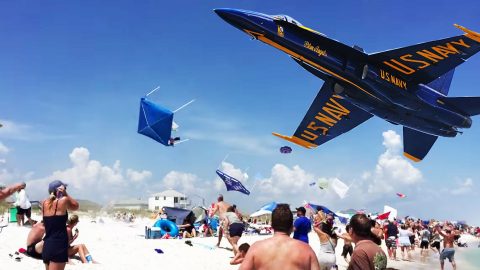 This video was shot during a Blue Angels Show in Pensacola, Florida. As you can imagine, seeing an epic show like this is awesome, but doing so on a nice day on the beach is beyond words. As you’ll see, people made it a whole day event and brought all the necessities with them including coolers, kids toys and umbrellas to keep out of the sun. Smart, except…

During an aerobatic maneuver, No. 5 Angel’s plane piloted by Lieutenant Commander Mark Tedrow performed a high speed low pass over the ecstatic crowd on the beach. Whether he did it on purpose or not we might never know, but the sheer speed created such a draft on the ground that it sent every tent and umbrella flying into the air.

It happened so fast that it initially looked like people were flying kites but then you realize that they’re actually giant umbrellas and tents high up in the air.

As a side note, we’re going to mention that the image is in fact photoshopped, as the jet flew by so fast catching it was nearly impossible. The video however, is of course real so enjoy!

Blue Angels Jet plane flies by, buzzes people on the beach and makes umbrellas go up in the air.

Posted by Prototypeviral on Thursday, February 11, 2016