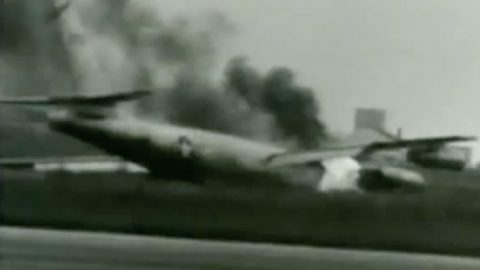 When testing out experimental aircraft, everyone has high hopes that these newly engineered aircraft will be successful. The Boeing B-47 Stratojet was the perfect bomber for its time, a bigger better version of bombers from WWII with the inclusion of jet engines. However, making a leap into drastically new technologies also can also come with many tragic setbacks.

The B-47’s swept-wing design paired with powerful jet engines made it a terrifying threat to the Soviet Union. It was a powerful bomber, but it was also a very flawed bomber in many ways. Previous bombers had crews of around ten people while the B-47 only had three causing difficulties in coordination while in flight.

In total B-47s experienced over 200 crashes which caused 264 fatalities, these numbers a far beyond anything acceptable by today’s standards. Although over 2,000 B-47s were produced they became phased out slowly with the introduction of the B-52 which was the perfected bomber design. This film shows a clip of the tragic crash landing involving a B-47, one of the many incidents experienced by this bomber.