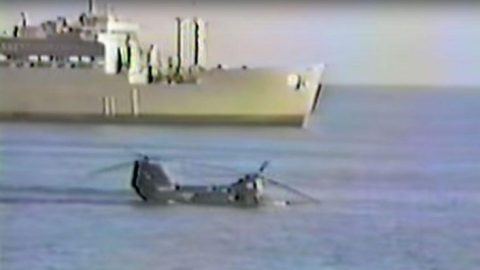 In the Spring of 1987, the USNS Spica was conducting a routine cargo transportation between ships in the North Arabian Gulf. A CH-46 was en route to the other ship when suddenly one of its engines suddenly failed mid-flight. The pilot struggles in an attempt to keep the helicopter airborne and sent the Sea Knight into autorotation towards the water.

“When engine power is lost during flight, helicopters are able to land in autorotation using aerodynamic forces to control their descent. Lower the collective fully down, and the resulting upward airflow through the rotors will continue to rotate the blades as the helicopter descends along a gravity-induced glide path that can be vertical or inclined.”

The pilot did the best he could considering the disastrous scenario but as the CH-46 began to fill with water it was impossible to save. In a twist of fate, the Sea Knight capsized to the right allowing the crew about to escape without risk of being harmed by the spinning rotor blades.

Fortunately, another Sea Knight was on site to aid in the rescue ensuring that the entire crew made it out alive. Normally Sea Knights are capable of floating on water surfaces for a period of time to allow for extraction of boats and divers but it is odd that this one sank so quickly.