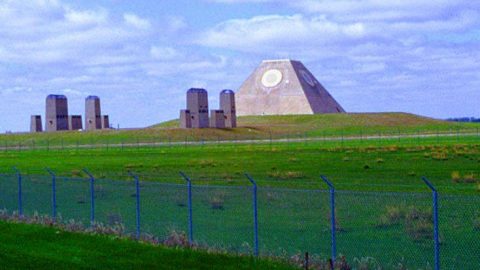 In the middle of the American Heartland there lies a large pyramid unlike any building nearby. This concrete structure is fenced off from the public and sits alone in the middle of grassy plains. So what is this strange relic of known as the Ghost Pyramid?

Once upon a time, this pyramid in the middle of Nekoma, North Dakota was a thriving military structure with a staggering cost of $2 billion. Officially known as the Stanley R. Mickelsen Safeguard Complex it was the first anti-ballistic missile defense system of the United States. It was constructed in the 1970s and housed 25 Sentinel missiles used to defend the United States against incoming missile attacks from the Soviet Union.

However, despite all the money and effort put into the Nekoma Safeguard Complex, there is a distinct reason why it was abandoned. The base was fully operational only one day before Congress shut it down. It was found that if the nuclear missiles were intercepted over the United States they would still create a nuclear fallout or would fail because the base was located at inland of the United States.

So now after $2 billion in spending the Ghost Pyramid still remains in the grassy field decades later. This film shows the history of the Stanley R. Mickelsen Safeguard Complex and how it looks today.