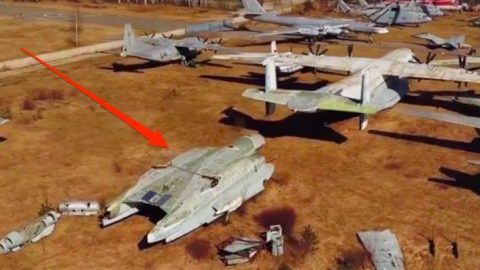 Recently a drone captured film of a Soviet Airfield home to a variety of aircraft both new and old. In the short clip, there was one very unusual aircraft that caught the eye of many viewers. Rumors began to swell that Russia was withholding a new classified aircraft, but a closer look reveals the truth behind this mysterious aircraft.

Upon closer inspection that aircraft is not new nor is it a secret, it is actually known as the Bartini Beriev VVA-14. This strange aircraft was developed by the Soviet Union during the 1970s with the purpose of anti-submarine warfare. It was an incredibly innovative aircraft with the ability to fly as well as hover over water and featured experimental vertical takeoff technology.

A few prototypes of the Bartini Beriev VVA-14 were built with great results. However, the vertical takeoff capabilities were never met with much success and were later canceled in favor of traditional flight. The project stalled after the death of its designer Robert Bartini in 1974 and was ultimately abandoned without his leadership.