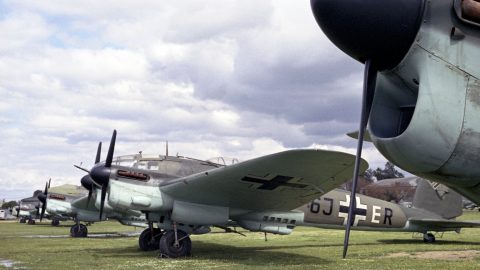 CASA 2.111 bombers, in Luftwaffe livery, ready for location filming on 'Battle Of Britain', directed by Guy Hamilton, Seville, Spain, 1968. The CASA 2.111 is a Spanish-built version of the German Heinkel He 111. (Photo by Keith Hamshere/Getty Images)

As the United States battled Germany in the later stages of WWII there was a noticeable lack of airborne combat. Losing the Battle of Britain had taken a toll on the Luftwaffe yet there was more gnawing away at them. During the course of World War II, Germans used 50 types of aircraft, while the United States used 18. A wider range of aircraft from different companies seems viable until the high cost of maintenance factors in. German planes are higher quality and use different guns rather than uniform weapons, which proves to be problematic.

“Until 1944 as the only branch of the German armed forces it controlled its own industry. Which is in contrast to the United States where the industry delivered the units most suited for mass production to the military.”

The German military began to shun away their engineers causing a divide from within. Engineers were seen as mere servants to the military which greatly reduced their morale and staggered productivity on research. Emphasizing a wider range of weaponry rather than focusing on reliable sources as the Americans backfired on the Nazis. Military History Visualized dives deeper into this internal corruption that helped undo a once powerful air force.