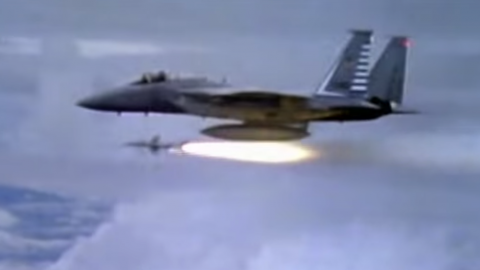 In 1979 the Cold War was in full swing as nations gravitated towards the communist regime. The influence of the Soviet Union had made its way to Middle Eastern nations such as Syria and Egypt. These countries became even more threatening when Russia began to supply them with MiG fighter jets. As these communist allies flexed their military muscle, the United States sent to aid in the best way possible, F-15 fighter jets.

“The F-15 was conceived in response to the USAF’s demand for an advanced fighter with better air-to-air ability than any other plane in service, or about to enter service, anywhere. One of the main catalysts that led to the FX tender (as it was called) was the public unveiling of the Soviet MiG-25. The MiG-25 was considered the most advanced plane in the world at the time, and the Americans feared they would lose their edge in air combat.”

The Israeli Air Force adapted to the F-15 fighters and readied themselves for possible attacks. MiG fighters launched a surprise attack in June of 1979 and Israel was forced to defend. Moshe Melnik was the pilot who scrambled to intercept the MiGs, and first to use the F-15 in direct combat.

Now a Brigadier General with over 38 years in the Israeli Air Force, Melnik goes over actual footage from the F-15’s first dogfight and provides testimony in this clip.