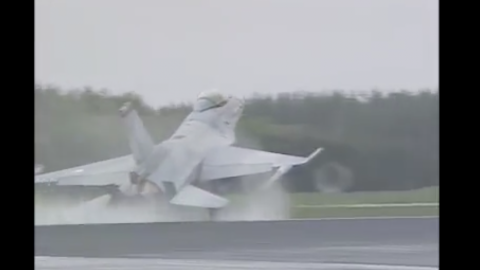 The second F-16 pilot might have just damaged those stabilizers during landing. Based on the sound heard around the 0:25 mark, something definitely popped out!

Though it is a bad landing, this might be the best bad landing you could ever wish for. In a general sense, the pilot still had control of the F-16. It just landed at an awkward angle, unfortunately. The wind and the bad weather definitely didn’t help him land properly either.

Hopefully, the pilot was okay after that. He might get chewed out after that landing though, especially since the first F-16 had a fairly smooth landing compared to his. His landing was too close for comfort!