Passenger Of F-14 Gets Confused, Grabs Handle While Inverted 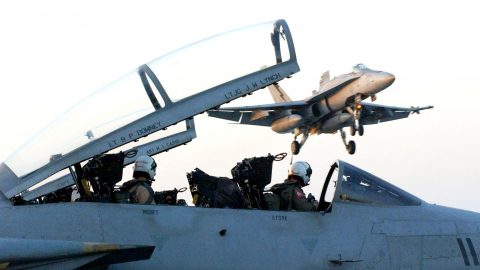 True Stories As Told By The Pilots Who Were There.

Here at World War Wings we strive to show and tell you about any aspect of aviation, be it vintage or modern. Recently we wrote a story that you all really like so we’re going to continue writing them for you. We found an incredible website which has a forum and military pilots exchange their stories there. Some of them you wouldn’t believe.

This one is the story of Lt. Geoff Vickers and a task he was given that didn’t go so well.

During a practice exercise at NAS Fallon, Nevada, Lt. Geoff Vickers was instructed to take battle-air-warfare commander in his F-14D Tomcat. The point was to show the commander how they train and what they do on a daily basis as well the capabilities of the planes he was overseeing.

The commander had previously hitched rides on E-2Cs and EA-6B, so he was no stranger to flying, but flying a tactical jet was a bit different. He received a brief from the pilot and wingmen and strapped into the Tomcat. In retrospect, Lt. Geoff Vickers said he noticed the commander was a bit nervous, but didn’t pay any mind to it at the time.

Looking back, seasoned pilot Vickers realized that being in the cockpit for as long as he had, he didn’t realize that flying in the back is a bit different. His hands for example, are on the throttle and the stick 99% of the time. When you’re in the back however, your hands are free, especially if you’re just a spectator. When inverted and just looking through some plexiglass at whatever is below you, your instincts tell you to just grab hold of something. That’s exactly what the commander did. Except…he grabbed the ejection handle.

Going at 300 knots, Vickers asked if he was ready for an inverted check. The last thing he heard from the commander was “all set” as rolled the plane. Then, Vickers heard a loud pop and his cabin depressurized.

Once the smoke cleared from the cabin, Vickers rolled the plane upright and looked at his instruments. Everything looked normal except for the fact that he was “now flying a convertible” as he put it. The control tower chimed in asking what happened.

“My RIO ejected. I’m still flying the plane,” is what he mustered up.

Vickers returned back to base while braving winds of about 320 knots. After confirming his checklist for such an incident with his wingman, he landed successfully. With such an event, he was greeted on the ground by everyone on the ground, the skipper even stepped out to give him a hug.

The commander was recovered almost immediately after he landed by an SH-60. He was taken to the hospital and left soon after with two minor cuts to his face.

Later that night at O’Club, the commander told Vickers that when they did the roll and he experienced the -.5 Gs, his instinctively grabbed the closest thing. Having had his hands in fists on his inner thighs, the ejection handle was that thing. The rest is history.