Fate Of The Man Who Refused To Salute Hitler 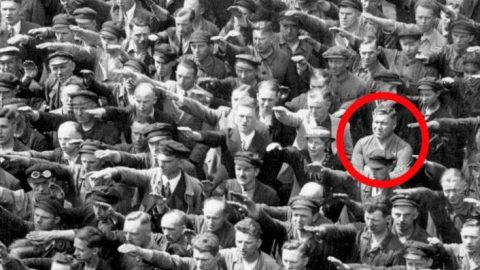 By now you have seen a historic image of a German man at a Nazi party rally who very obviously refused a salute to Adolf Hitler. Not honoring the leader of the nation was the ultimate act of treason in the eyes of Germany. His name was August Landmesser and he had a very noble reason to defy Hitler.

August Landmesser was a member of the Nazi Party and a devout follower of Adolf Hitler like the majority of Germany. He lived a normal life and had a humble job working in the Blohm+Voss shipyard in Hamburg. A normal life would change well he fell in love with a woman named Irma Eckler. This seems like a fairly normal thing for a Landmesser and his humble life but the issue was Irma Eckler was Jewish.

August Landmesser’s decision was easy, he chose love over the Nazi Party. However, the newly enacted Nuremberg Laws prevented his union with Irma Eckler and they eventually had a child. Then came the moment that solidified his place in history, the launch of the Horst Wessel. There August Landmesser defiantly refused to salute Adolf Hitler as he addressed the public and the Nazi Party took action.

His engagement to a Jewish woman caused Landmesser to be expelled from the Nazi Party. Fathering a child with Irma Eckler branded him a traitor as many claimed he was “Dishonoring the race.” For his actions, he was sent to a concentration camp for a period of two years and after that, he was forced into a military unit made up entirely of prisoners. His unit was poorly armed and essentially used as a human shield, he was killed in a conflict with the Soviets in 1944.

Landmesser made a bold decision to defy a dictator and follow his heart and his bold statement has been immortalized forever. This video goes into deeper detail about the tragic life of August Landmesser.