First Public Look Inside F-35’s Helmet – What Can It Really Do? 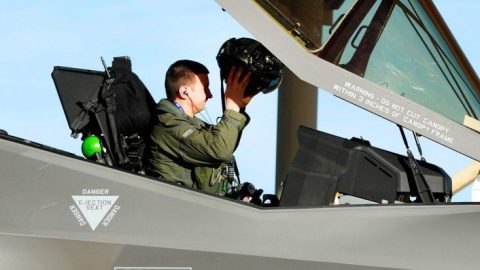 Head In The Clouds.

The Lockheed-Martin F-35 Lightning remains a controversial figure within the aviation community for several reasons. There are some pilots who love it, there are some who wish to remain with more established aircraft. However, one thing that is almost universally agreed upon is the F-35’s innovative helmet display is a wonderful accessory for pilots.

The F-35’s helmet has a staggering price tag of $400,000 but it does come with some pretty nifty features. The display shows a full view surrounding the aircraft thanks to six infrared cameras mounted on the aircraft. Pilots have described this visual as being able to “look through” the jet to see everywhere they require.

“All the information pilots need to complete their missions – airspeed, heading, altitude, targeting information and warnings – is projected on the helmet’s visor, rather than on a traditional Heads-up Display.”

The trillion dollar F-35 has many opponents that don’t want it to replace current military aircraft but no one is denying how the situational awareness its helmet provides in combat. The F-35 helmet has mostly been limited to military personnel but recently the public was allowed a look inside this advanced display, check it out in this video.