Gigantic C-5 Ends Up On Short Field, Now Has To Take Off 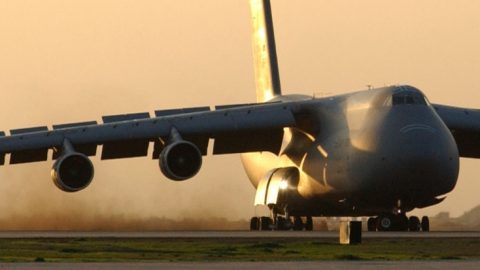 The C-5 Galaxy is the biggest aircraft in the United States Air Force and it never fails to impress. This behemoth can carry tanks, submarines, even other planes inside its cargo hold and still have extra leg room. The C-5 does take up quite a bit of space and that can be a little problematic especially during takeoffs.

Sporting a 223-foot wingspan, C-5 Galaxy dwarfs even the biggest bombers by a longshot. They do a great job bringing massive loads of cargo to military locations but there is a bit of a drawback when it comes to fuel consumption and maintenance. The C-5A variant was retired due to excessive these concerns, averaging 23 hours of maintenance per flight hour.

“The C-5 has been emblematic of the US resolve to do good in the world by providing an unmatched capability to help people anywhere when they need assistance.”

– Dr. Doug Lantry (National Museum of the US Air Force)

Then there is the bigger problem, that not every landing strip in the world is designed to accommodate such a big plane. This C-5 Galaxy ended up on a strip that is more dirt than strip and doesn’t have a lot of room to move. You really hear this thing’s engine’s roar as it prepares for its ultimate challenge of taking to the skies.