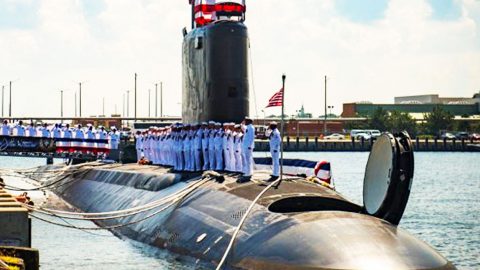 A series of new videos released by the DoD shows the pre-commissioning inspection of the newest submarine about to join the U.S. fleet – USS South Dakota (SSN-791.) The contract was awarded in 2008 to Electric Boat, a division of General Dynamics in Virginia, and after almost 10 years was finally completed.

USS South Dakota, a Virginia-class submarine, was laid down in 2016, christened in 2017 and is now being put through sea-trials. Once complete, the DoD assesses it’ll join the fleet in February of 2019.  A nuclear-powered fast attack submarine, this vessel will be the 17th built in its class out of 66 submarines ordered. They’re expected to be in service well into the 2070s.

Captain Chris Hanson, the program manager, stated, “South Dakota’s delivery is an important milestone. It marks the penultimate Block III delivery and will be a vital asset in the hands of the fleet.” That being said, this is the world’s most advanced submarine as of this writing, incorporating the latest stealth, intelligence gathering and weapons systems.

The Navy’s newest fast-attack #submarine, #USS #South #Dakota (#SSN 790) will be commissioned at naval submarine base New London in Connecticut, on February 2, 2019. It is the seventeenth #Virginia–#class submarine to join the #US fleet. https://t.co/HlNGUkwuwV

The video below will show you a bit of the modern interior of the submarine but it is, of course, only the footage we the public are allowed to see.