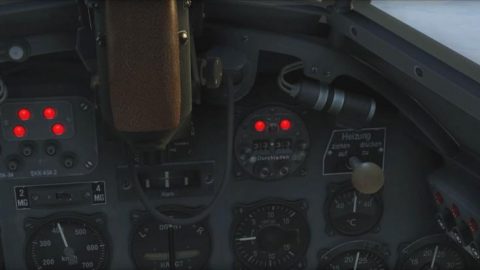 Combat pilots know that a dogfight can be one of the most intense experiences of their lives because there is a strong chance that it could be the last experience of their lives. During World War II pilots would go all out against enemies in frenzied free-for-alls shooting at targets and dodging enemy fire until one side claimed victory. However, there is the scenario where a fighter could run out of ammunition mid-battle from all that shooting. So how does a WW II-era plane reload while in flight?

“Let’s imagine that our Bf 110 is in a dogfight and he starts shooting his guns. If you think about it in this combat situation reloading these guns is going to be somewhat difficult. The gunner has to take [the ammo] drums out, has to put one aside, put the next one in, charge the gun and repeat the process with the next gun. Making the plane virtually defenseless from the rear.”

Many WW II-era planes did not need to reload their weapons mid-flight but the Messerschmitt Bf 110 was one of them. Using a visual guide inside a Bf 110 we gain a  better perspective from the gunner’s point of view and exactly how they were able to reload the cannons during aerial combat.