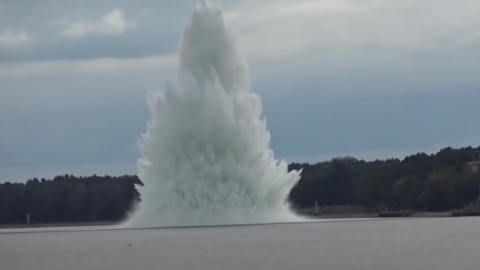 Swinoujscie, Poland, Oct. 13- The largest WWII bomb ever found in Poland was set off the other day. This was known as the ‘Tallboy’ bomb. Over 750 were evacuated before the operation and there were no injuries from anyone, including the divers. The bomb weighed 12,000 lbs and was detonated in the Piast Canal. This was a strategic channel the Germans used to move into the Baltic Sea.

Bomb was dropped by the British Royal Airforce, attacking the German Lutzow back in 1945. Obviously the bomb missed its target and went straight to the bottom of the canal where it had sat for many years. They were able to detonated by remote control after a failed attempt to diffuse it.