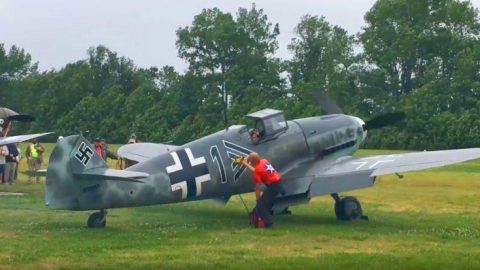 Watchers of the Planes

The Messerschmitt Bf-109 was the backbone of the German Luftwaffe during WWII. It’s speed, firepower and superior numbers made it the plane to be feared by Allied pilots in the skies over Europe.

Nearly 34,000 Bf-109s were built during WWII taking just roles ranging from fighter, escort, bomber, night fighter, recon. It seemed like there was no role that the Bf-109 couldn’t take on with great success. The only real limitation to the Bf-109 was its limited range which resulted in many pilots losing their lives as they ventured from Germany to Britain for combat missions.

“By the end of October 1940, the British had lost 1,149 airplanes, mostly fighters. The Luftwaffe lost almost 1,800 aircraft, one-third of them Bf 109s. For the first time, Hitler had been checked and a few months later he turned East, with devastating consequences.”

It certainly wasn’t the best fighter of the Second World War and had issues with limited vision and problematic landing gear, but it certainly got the job done. Only a handful of Bf-109s survived the war and only about four of those are still operational. Take a moment to see one of those rarities come to life and hear the booming sounds of the Luftwaffe fighter in all its glory.