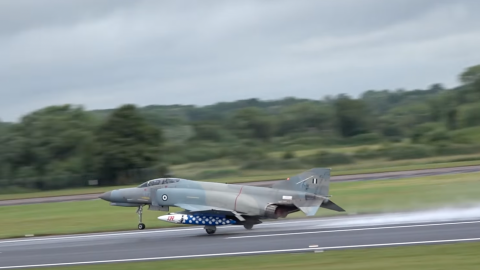 There are only 4 countries where F-4 Phantoms are in service. One of those is Greece which still has 18 of these gorgeous planes in service.

However, these F-4s belong to the AUP variant which is equipped with a radar similar to the F/A-18 Hornet. It also had upgraded displays, new onboard Mission Control Computers, and could carry advanced air-to-air and air-to-ground missiles. These are still used in multi-role missions by the 338 (Ares) and 339 (Ajax) Squadrons in Andravida, Greece.

Here we see two F-4 AUPs takeoff. These were slated to perform at the Royal International Air Tattoo 2016. The F-4 shared the stage with F-22, F-35, and the Airbus A400M. Looks like that show was quite enjoyable judging from its roster of performers!